I am happy to finally announce the symbolic release of lyon 1.0.0.

lyon is a Rust crate providing a number of functionalities related to vector graphics and rendering them using polygon tessellation. The most interesting and complex piece is lyon_tessellation's fill tessellator which produces a triangle mesh for any arbitrary vector path including shapes with holes and self-intersections. Some people prefer to only use the lyon_geom crate which provides a lot of useful bézier curve math, or lyon_path for building and iterating vector paths.

lyon first hit crates.io around mid 2016. There have been quite a few releases since then and the last release with breaking changes before 1.0.0 was in January 2021, so about a year and a half ago at the time of writing. The project is quite stable and I have been happy with the robustness of the tessellator for a while. So why not publish a 1.0.0 sooner?

For a large part I, like many in the Rust ecosystem, have been guilty of a bit of "1.0 semver shyness" there's this irrational fear of marking something 1.0 while it isn't perfect and it's API completely figured out. The reality of software is of course that nothing is ever perfect. The other reason, the more important one, is that I've always wanted this project to grow into a fully featured 2D renderer. It was my goal at the beginning and In the process I found that making a fast and robust tessellator is a project in its own right and I got side-tracked. I think of it as a good thing, I am sure that a decent portion of lyon's users are interested in some of the difficult low level components more than in a fully fledged renderer. I haven't given up on the idea, but realistically it will be far enough in the future that the version number should reflect how I think of the pieces that I have now.

So there you have it. I'm taking this ridiculously tiny psychological leap and incrementing the major version to 1, giving me access to not two but three semver numbers to define versions. There will be a 2.0 eventually, and surely many other major versions after that.

For this release, I wanted to implement something fun. The stroke tessellator lets you specify a line width that is constant over the entire path. What if you wanted the line width to change along the path? In lyon 0.17 you could approximate this effect by storing a line-width per endpoint using custom attributes and implementing your own StrokeGeometryBuilder or StrokeVertexConstructor to move each vertex along its normal.

Rendering the tessellated geometry of this example would look like: 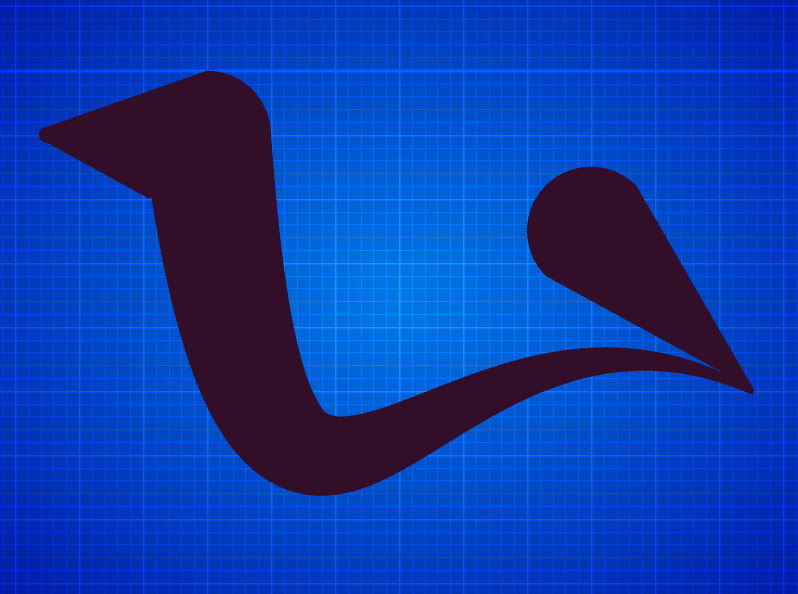 It works, kind of. See how the joins and caps don't look quite right? I would expect the outline to have a smoother curvature where the edges meet joins and caps like in the image below which was produced using lyon 1.0's built-in support for variable line width. 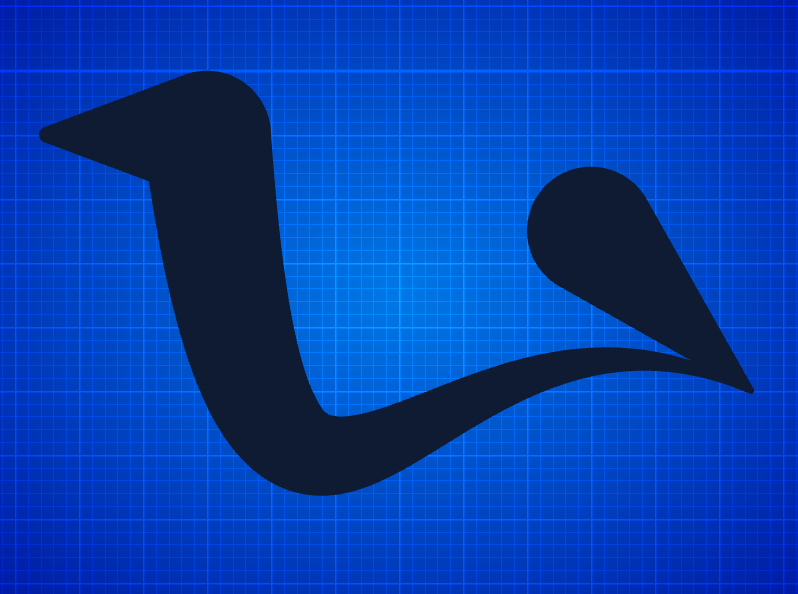 Implementing this feature required a bit of high school trigonometry and a full rewrite of the stroke tessellator.

Some of the APIs have changed a bit so here is the equivalent code for lyon 1.0:

That said, there is an important shortcoming to this approach to variable line widths. The line width is interpolated very naively, using the bézier curve t parameter. This means that the interpolation will tend to vary more rapidly along curvier parts of the curve than around the more flat parts.

But hey, it's still fun to play with, I hope it will be useful to some and I'll what the next iteration of this is based on the feedback I receive. Having the option to interpolate attributes linearly (based on distance instead of the curve parameter) could be a pretty nice feature for lyon 2.0 or some other future release if there is interest for it, just like a more "serious" curve offsetting algorithm.

The path sampler in lyon_algorithms

Shout out to @Mivik for proposing and implementing this new feature. In previous versions of lyon, if you wanted to find a point at a certain distance along a path or sample positions at fixed intervals along a path, you could use the PathWalker which goes through the path and fires callbacks at certain distances. Each time a path is walked the algorithm starts from the beginning. If you want to place many points along a path once it is great, however if you need to do thousands of randomly ordered queries on a very large path, this approach is inefficient.

The idea behind path sampling is to create an acceleration data structure, called PathMeasurements, the creation of which has an important up-front cost (in the same ballpark as walking the path from the beginning to the end), but allows subsequent queries to be much faster than walking the path.

As a bonus the path sampler can be configured to either sample at certain distances along the path, or sample at normalized distances (between zero and one where one means the end of the path).

Lots of new goodies in lyon_geom

In no particular order:

The rest of this post goes into some some API details. It is probably not a particularly fun read unless you are using some of lyon's advanced features. You have been warned.

I did my best to avoid changing the whole API with this one, so it will hopefully not affect most users, unless they use or implement the PathBuilder trait manually.

So what are custom attributes anyway? Custom attributes, also called "interpolated attributes" in some places, are a fixed number of f32 values that can optionally associated with each endpoint in a path. They can be used to represent various things, such as our varying line width example above, colors, or whatever can be linearly interpolated between endpoints. The fill and stroke tessellators provide access to them when creating vertices and lazily interpolate them if needed for vertices that are along a curve or at the intersection between edges.

One of my motivations with lyon 1.0 was to get custom attributes better integrated with the various path manipulation abstractions and adapters. If a path data structure implements the PathBuilder trait, it automatically gets access to some generic functionalities such as flattening curves into line segments, applying transforms and other goodies. Before 1.0 PathBuilder methods used to not take custom attributes, so all of the generic adapters were only available to paths without attributes.

To avoid the need to explicitly pass empty attributes (&[] or NO_ATTRIBUTES) everywhere when they aren't needed, there is a NoAttributes<Builder> adapter that exposes the PathBuilder methods without the attributes parameter.

In addition, some algorithms built on top of PathBuilder such as the path walker got support for custom attributes.

The SVG path syntax parser which was optionally available in the lyon_svg crate was re-implemented in the lyon_extra crate. The new parser supports a superset of the SVG path syntax in order to support specifying custom attributes. The syntax is the same with one exception: after each endpoint the following sequence of N numbers are parsed as the attributes of the endpoint.

You can give it a try in the command line app in the cli folder of the repository:

This change was pretty significant internally, but will only affect users of StrokeVertex::side.

This enum is used to indicate on which side a point is along a stroked path. The side is determined using the sign of the cross product between and edge's tangent and a vector between the edge and the point in consideration. If the cross product is positive, we are on the left side... wait is it the right side? Well it depends on whether your y axis points up or down. Lyon's tessellators don't know or need to know about that. A possibility could have been to standardize on the y-down convention like most vector graphics packages, but it was a source of confusion and bugs. The new terminology, while less evocative, is unambiguous and less error prone. As a bonus lyon_tessellation doesn't get dictate or contradict its users conception of what is up and down which I think is a good thing.

In this release I removed a number of redundant or half-baked features that I felt was either not needed anymore, or wouldn't receive proper attention:

I suspect that most of the removed features had little to no users. If you depended on one of them, I suggest copying their implementation from lyon 0.17 in your code.

These removals relieve some maintenance burden and bring the whole package to a more consistent level of quality and robustness. Some of the half-baked parts contributed to my mental block around calling it a 1.0.

lyon 1.0.0 wasn't as big a release as, say, 0.15.0 in which the fill tessellator was rewritten. It isn't the end of a cycle nor the beginning of one, it is simply time to do a bit of cleanup and mark the symbolic 1.0 to reflect that the project is fairly stable.

I did rewrite the stroke tessellator to introduce the fancy variable width feature. It was not a major effort because the stroke tessellator is a fairly simple algorithm, but it means there's realistically a higher risk of finding some new bugs there. I encourage you all to report any issue you run into and I will do my best to fix them quickly.

There are a number of lyon-related things I would like to do next, some of which are venturing away from tessellated triangle meshes. I don't want to tease them out too soon as it may be a while before I get them into a workable state. Stay tuned!

This symbolic milestone is as good a time as any to thank all of the people who contributed in small or in big ways to the project. So in chronological order, many thanks to:

Thank y'all! You rock!